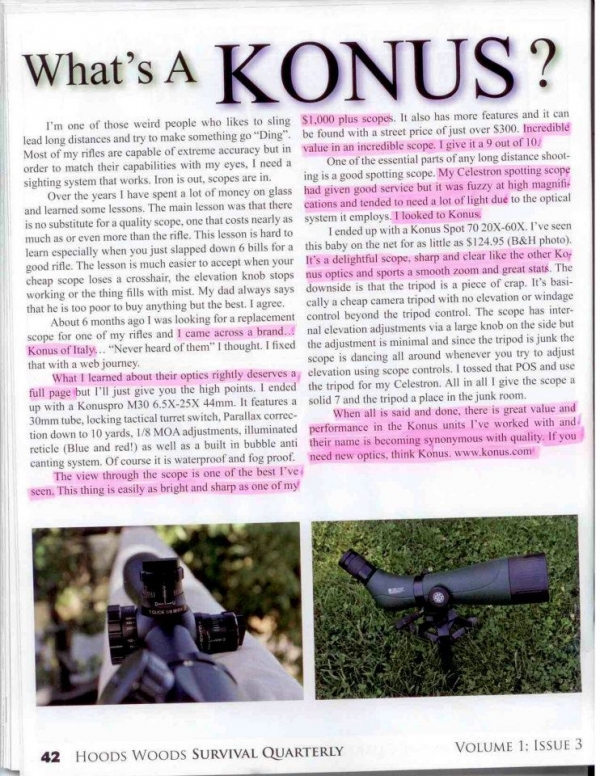 KONUSPOT ON THE SURVIVAL QUARTERLY MAGAZINE

I'm one of those weird people who likes to sling lead long distances and try to make something go "ding". Most of my rifles are capable of extreme accuracy but in order to match their capabilities with my eyes, I need a sighting system that works. Iron is out, scopes are in. Over the years, I have spent a lot of money on glass and learned some lessons. The main lesson was that there is no substitute for a quality scope, one that costs nearly as uch as or even more that the rifle. This lesson is hard to learn especially when you just slaped down 6 bills for a good rifle. The lesson is much easier to accept when your cheap scope loses a crosshair, theelevation knob stops working or the thing fills with mist. My dad always says that he is too poor to buy nanything but the best. I agree.
About 6 months ago, I was looking for a replacemtne scope for one of my riles and I came across a brand....Konus of Italy..."Never heard of them" I thought. I fixed that with a web journey.
What I learned about their optics rightly deserves a full page but I'll just give your the hig pints. I ended up with a Konuspro M30 6.5-25x44mm. It features a 30mm tube, locking tactical tureet swithc. Parallax correction down to 10 yards, 1/8 MOA adjustments, illuminated reticle (blue and red") as well as a built in bubble anti canting system. Of course it is waterproof and fogproof.
The view thourgh the scope is one of the best I've seen. This thing is easily as bright and sharp as one of my $1,000 plus scopes. It also has more features and it can be found with a street price fo just over $300. Incredible value in an incredible scope. I give it a 9 out of 10.
One of the essential parts of any long distance shooting is a good spotting scope. My Celestron spotting scope had given good servide but it was fuzzy at high magnifications and tended to need a lot of light due tothe optical system it employs. I looked to Konus.
I ended up with a Konuspot-70 20x-60x. I've seen this baby on the net for as little as $124.95 (B&H photo).
It is deligtful socpe, sharp and cear like the other Konus optics and sports a sommoth zoom and great stat. The downside is that the tripod is a piece of crap. It's basically a cehap camera tripod with no elevation or windage control beyond the tripod control The scope has interal elevation adjustments via a large know on the side but the adjustment is minimal and since the tripod is junk the scope is dancing al around whenever you try to adjust elevation using scope controls. I tossed that POS and use the tripod formy Celestron. All in all I give the scope a solid 7 and the tripod a place in the junk room.
When all is said and done, there is a greatvalue and performance in the Konus units, I've workd with and their name is becoming sysnonymous with quality.
If you need new optics, think konus.