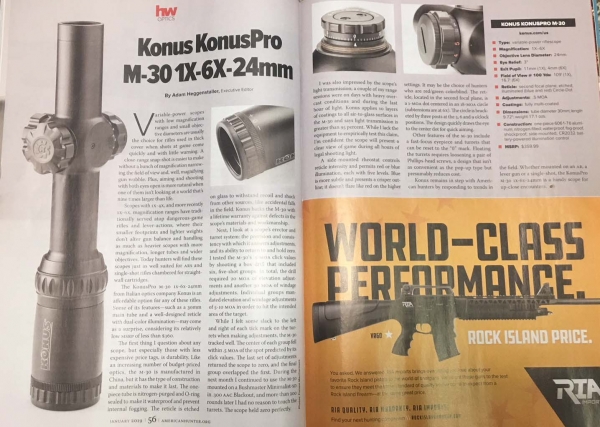 I was also impressed by the scope's light transmission; a couple of my range sessions were on days with heavy overcast conditions and during the last hour of light. Konus applies 10 layers of coatings to all air-to-glass surfaces on the M-30 and says light transmission is greater than 95 percent. While I lack the equipment to empirically test this claim. I' confident the scope will present a clear view of game during all hours of legal shooting light.
A side-mounted rheostat contrlos reticle intensity and premits red of blue illumination, each with five levels. Blue is more subtile and presents a crisper outline, it doesn't flare like red on the higer settings. It may be the choice of hunters who are red/green clolorblind. The reticle, located in the second focal plane, is a 1-MOA dot centered in an 18-MOA circle (substensions are at 6x). The circle is bracketed by three postss at the 3.6 and 9 o'clock positions. The design quickly draws the eye to the center dot for quick aiming.
Other features of the M-30 include a fast focus eyepiece and turrets that can be reset to the "0" mark. Floating the turrets requires loosening a pair of Phillips-head screws, a design that isn't as conveninent as the pop-up type but presumably reduces cost.
Konus remains in step with American hunters by responding to trends in the field. Whether mounted on an AR, a lever gun or a single-shot, the Konus Pro M-30 1x-6x24mm is a handy scope for up-closed encounters.