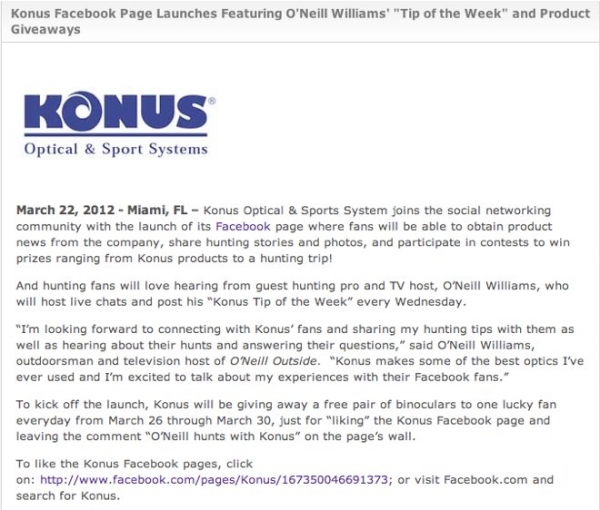 KONUS optical & sports systems joins the social networking community with the launch of its Facebook page where fans will be able to obtain product news from the company, share hunting storeis and photos, and partecipate in contests to win prizes ranging from Konus products to a hunting trip!
And hunting fans will love hearing from guest hunting pro and TV host, O'Neill Williams, who will host live chats and post his "Konus Tip of the Week" every Wednesday.
"I am looking forward to connecting with Konus' fans and saring my hunting tips with them as well as hearing about their hunts and answering theri questions, "said O'Neill Williams, outdoorsman and television host of O'Neill Outside. "Konus makes some of the bestooptics I've ever used and I'm excidted to talk about my experiences with their Facebook fans".
To kick off the launch, Konus will be giving away a free pair of binoculars to one lucky fan everyday from march 26 through march 30, just for "liking" the Konus Facebook page and leaving the comment "O?Neill hunts with Konus" on the page's wall.